We have been working with primary schools in London and across England for nearly ten years on a project called Science Opens Doors. This project was started as a result of research which found that many children at primary schools (and their parents) had little knowledge of the wide randge of careers that rely on a good STEM education. We have now got the opportunity to update and expand this experience, and so we have created Science Gateways.

Our focus has been on fun and inspiring practical work that can be undertaken by children and adults. We have developed a large number of activities that can be done with minimal equipment. During the initial pandemic lockdown period we made a number of these available in a very low cost format, suitable for parents working at home with small groups of children. We have collected and enhanced these, and you will find them here.

During the second and third pandemic lockdowns we provided teachers with a range of low-cost activities that could be done by individuals in a class, without sharing equipment or materials. More importantly, teachers found that these activities can be used for parents and children working together at home, and sending their results into school. Again, we have collected and enhanced these, and you will find them here.

Apart from the practical work we think so necessary for children to enjoy and be inspired by science, we also offer resources about science and technology for teachers to use with classes. These are closely tied to the practical work, and offer teachers the opportunity to set continuation work at home, including materials that involve parents. Our aim has always been to involve parents, to blow away the mystique that so often develops around science.

We’re not aiming to set out a complete curriculum for you to follow. Rather we want to offer resources that will enhance what you already do, and may help with the difficulties of teaching during the pandemic (we’re also confident these materials will be useful afterwards, as well).

Organising practical science in schools or at other sites for parents and children to work with demands that materials be robust, reliable and lightweight – and that they can be safely and effectively handled by members of the public. For this we tend to use a lot of wood, paper and plastic (we’re always very careful about the proper recycling of any plastics used). We’ve given costings of all the materials involved in activities on the activity pages, and many people will be amazed at the low costs involved.

Practical science doesn’t have to be about expensive equipment. In many ways, it is better if it is not about specialist equipment, because expensive elaborate equipment gives rise to the idea that science is a subject unrelated to the real world and practised only by a clique of white-coat wearing individuals.

We have always taken it as a rule that our activities should be accessible to as many people as possible. Over the lockdown spring and summer we had the opportunity to develop our ideas further, and produce a range of activities that depended mainly on recycled and scrap materials – yet were just as much fun and educational. To see what we came up with visit our sister site

Why are the Horners involved?

Our project, Science Opens Doors, has been running in primary schools since 2011. This aims to increase awareness of science–related careers among primary children. Research has indicated that many children are missing out on possible science career pathways, and the project has been working with children and their parents since 2011 to address this. However, under the present circumstances, we are unable to make the visits we have developed. We hope to resume these at some point in the future! 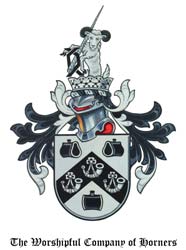 The Worshipful Company of Horners and Science Education

Since Roman times, crafts and skills have sustained the commerce of the City of London. Each of the ancient crafts and their trades became represented by their guilds, and since Norman times these guilds have played an important part in the in the business and political life of the City. Their importance was formalised by the granting of Royal Charters, and with this legal status, the guilds started wearing their own distinctive liveries, and became known as Livery Companies. The first Royal Charter was granted to the Weavers’ Company in 1130, preceding the appointment of the first Lord Mayor in 1192. Since that time the Livery Companies have protected their crafts, upheld the traditions and practices of the City, and supported the Lord Mayor, often through events of great historic importance.

The first known reference to the Horners’ Company was in 1284, when ‘its ordinances were corrected’, making it one of the most ancient of Livery Companies. In 1391, the Company was granted new ordinances, and in 1362 the Leather Bottlemakers were placed under its protection, and were incorporated into the Company in 1476. An important Statute in 1465 protected the rights and ‘mysteries’ of the Horners, and became the core of the Royal Charter granted to the Company in 1638. Mediaeval crafts and products had great importance, both commercially, and in everyday life. The Salters’ Company controlled the trade in salt, a vital commodity for the preservation of food in the Middle Ages. The Horners worked and moulded animal horn, which is a natural plastic [keratin] into many articles including beakers, utensils, combs and buttons, but its greatest use, right up to the 18th century, was in being beaten into translucent leaves to be fabricated into windows and lantern leaves. The word ‘lantern’ is derived from ‘lanthorn’.

As the basic products and skills of many of the Companies declined and were superseded by products based upon modern technologies and economics, during the 20th Century many Liveries sought to embrace alternative industries that preserved their roots, but provided a progressive new focus. The Salters have espoused the chemical industry , and, unsurprisingly, the Horners’ have adopted the Plastics industry. There is much science and technology in the design and manufacture of plastics and hence, the Company focuses most of it’s charity activities upon science education and modern design.

Today, the Horners’ Company supports projects in primary and secondary science education, the further training of science and technology teachers, and gives awards for commercial design,. student design, artistic design and outstanding apprentices. Thus, an ancient Livery Company is promoting excellence in science, technology and design, while being always mindful of its history and traditions. The presentation of drinking horns, very appropriately binds the past with hopes for a vibrant future based upon innovative young people.

The Worshipful Company of Tallow Chandlers

The Tallow Chandlers Company is one of the 110 Livery Companies of the City of London, and with the first written mention of the craft guild in 1376 it is one of the oldest. It originally began as a group of tradesmen, making and selling candles made from tallow (the rendered fat of animals such as cows and sheep), eventually being granted full Livery status in 1462. As such the Company was key in monitoring London’s manufacture and trade not only in tallow candles, but also other domestic goods such as oils, sauces and soaps.

Today the company maintains links with tallow’s modern equivalents and descendants, from tallow rendering or candle making businesses to associations. On the basis of shared interests in heat and light, the Company has built a relationship with BP, with whom the Tallow Chandlers’ support a primary school in the Isle of Dogs.

As well as supporting charitable organisations, much of the focus today is on the education of young people with a particular emphasis on science, technology, engineering and maths. In addition to our various bursaries, donations and scholarships, we have three flagship schools which receive some of our largest donations and non-financial support programmes.